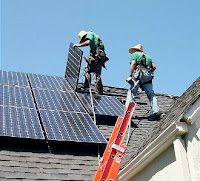 Laid off autoworkers are retraining for green jobs in Michigan.

Cooler Planet.com news reports:
"thanks to Michigan’s No Worker Left Behind program, launched in 2007, 80,000 workers have so far been retrained, many of them under the Green Jobs Initiative. In fact, according to a May 2009 Green Jobs report, the state now supports 109,067 green jobs, 96,767 having a direct impact on the new green energy economy and the balance representing support jobs. This puts Michigan’s green job category at 3 percent of overall employment. A newer initiative, proposed by President Barack Obama, hopes to extend the program, and the funding, to by $12 billion to aid those unemployed who are still left behind.Many of these green jobs are in solar energy, and at Henry Ford Community College in Dearborn, laid-off auto workers are retraining to install and maintain photovoltaic (PV) solar panels.... GM’s failure, falling solar panel prices, the potential for Peak Oil in a decade, and a president’s commitment to renewable energy and renewable energy jobs – appears to have reached a conflux whose effect can’t yet be statistically calculated, but may the perfect driver for America’s green energy future." See full article.
Posted by Kevin Coyle at 6:08 PM