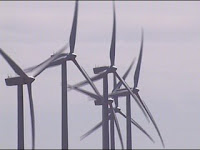 Trading Markets.com reports:
"Wind is the world's fastest-growing source of power generation with an average annual growth of 29% over the last ten years. At the beginning of 2009, the global wind power generating capacity stood at almost 121 gigawatts (GW), representing a twelve-fold increase from a decade ago when world wind power generation capacity was just over 10.2GW. Being an emerging fuel source a decade ago, wind energy has grown rapidly into a mature and booming global industry, primarily due to global concerns over climate change, energy security and declining costs of wind power generation. The future prospects of the global wind industry are very encouraging and it is estimated to grow at a CAGR of 19.75% between 2008 and 2015 to reach 425GW by 2015." See full article.
Posted by Kevin Coyle at 6:32 AM