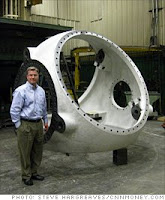 The slow down in the U.S. automobile industry has a massive effect on the economy. But alternative energy-related manufacturing is offering some promise.

CNN Money reports:
Surrounded by farms, a family-run manufacturer is getting in on the business everyone from President Obama on down hopes will clear the air, wean the country off imported energy, and replace the fast-disappearing auto jobs: Making parts for the burgeoning renewable energy sector.
For the last two years, the Minster Machine Company has been forging the giant cast-iron hubs that keep the blades attached to the center of a wind turbine. "The wind market for us was a diversification strategy," said John Winch, who followed his father, grandfather and great-grandfather in helming the 103-year old company. Minster Machine also makes the equiptment that make the parts for the auto, medical and food industries, among others.
One study by the University of California, Berkeley estimated that green energy companies employ at least half a million people. That number could climb to 2 to 4 million over the next 15 years if the nation got 15%-20% of its power from renewable sources. See full article.
Posted by Kevin Coyle at 1:59 PM