U.S. Lags Behind G8 Nations In Grabbing Hold of the New Green Economy 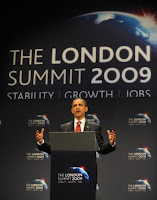 Recent congressional debates over whether green jobs are real are occuring in the U.S. but a new economic report card shows the America is having the debate by itself while other G8 nations are moving forward -- creating jobs and pushing boldly into the new green economy.

The World Wildlife Fund and Allianz SE report:
"The G8 Climate Scorecard, released by World Wildlife Fund and global financial services company Allianz SE, comes one week before heads of state gather in Italy for the 2009 G8 summit. 'During debate on the energy and climate bill in the House of Representatives last Friday, opponents of the legislation demanded that other countries first step up to the plate,' said WWF President and CEO Carter Roberts. 'The truth is that not only has much of the rest of the world already been at the plate, they're several innings into the game and we're only now emerging from the dugout." Other nations have dramatically cut greenhouse gas pollution, set national targets, ramped up investments in energy technology and set regulatory frameworks to spark innovation in key sectors. And now other countries dominate markets in sustainable energy and technology. 'It is time for the U.S. to get into the game and make up for lost time.' Roberts said." See full article.
Posted by Kevin Coyle at 8:20 PM