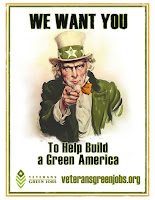 Newsweek reports:
"Nonprofit groups like Boulder, Colo.–based Veterans Green Jobs, which last year launched"rapid training and deployment" workshops to hone vets' skills and funnel them into energy companies, deepen the talent and recruitment pool. Following suit, a Washington nonprofit called the Truman National Security Project launched a program this month to train vets to drive the message of an undeniable overlap between green energy and national security.
In some instances, veterans are acting as recruiters for their new employers. Tim Hyclak, an Air Force crew chief who did six tours in Iraq, is now a maintenance technician with Solaicx, an early-stage solar manufacturer. He heard about the company from a fellow vet and has instructed his friends to call him for jobs when they're discharged." See full article.
Posted by Kevin Coyle at 5:42 AM