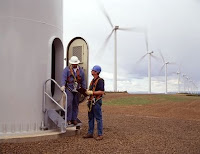 Oregon did a tally of its green jobsfor 2008

The Portland Business Journal reports:
"Three percent of the jobs in Oregon in 2008 were considered 'green jobs,' according to the new Oregon Employment Department report "The Greening of Oregon’s Workforce: Jobs, Wages, and Training." The report, based on a survey of employers, found that 51,402 green jobs accounted for Oregon’s private, state government, and local government employment. Green jobs were reported in all broad industry groups and were spread across 226 occupations." See full article.
Posted by Kevin Coyle at 8:49 PM