Pew Study: Much Higher Growth Rate in Green Jobs In All 50 States 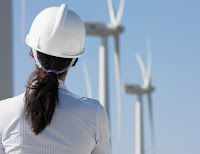 A new study finds, that even without major policy and public investment support, the green job sector is growing faster that the overall economy.

In The Clean Energy Economy Pew reports:
"Between 1998 and 2007, its jobs grew at a faster rate than overall jobs. Like all other sectors, the clean energy economy has been hit by the recession, but investments in clean technology have fared far better in the past year than venture capital overall.
By 2007, more than 68,200 businesses across all 50 states and the District of Columbia accounted for about 770,000 jobs that achieve the double bottom line of economic growth and environmental sustainability.
Pew’s research shows that between 1998 and 2007, clean energy economy jobs—a mix of whiteand blue-collar positions, from scientists and engineers to electricians, machinists and teachers—grew by 9.1 percent, while total jobs grew by only 3.7 percent. And although we expect job growth in the clean energy economy to have declined in 2008, experts predict the drop in this sector will be less severe than the drop in U.S. jobs overall." See full article.
Posted by Kevin Coyle at 3:40 PM