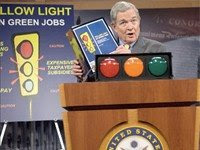 A 2009 report by Senator Kit Bond (R-MO) says that the rising excitement over U.S. green jobs is misguided and overrated and will not deliver the vibrant new economy so many experts are predicting. (Scroll down through this weblog to see some of the studies and cases documenting robust green job growth.)
Conservative columnist George Will picked up this banner recently with a piece about Senator Bond's report (which draws heavily on the work of 36 year old spanish economist Gabriel Calzeda of Rey Juan Carlos University.) It basically says: a) more people will lose their jobs than will get new green jobs and b) the jobs will be low-paying. It is surely good to question all assertions and assumptions about green jobs but some feel this skepticism may have its own biases and political flavoring.
Matthew Wheeland at GreenBiz.com reports:
Are Green Jobs Skeptics the New Climate Deniers?
"It's the same line we've heard repeatedly in the last few months. Last month, I sat in on a press conference detailing the "myths" about green jobs discovered by researchers from several universities. That report, "Green Jobs Myths," had much the same worries as Bond's reports: we're in the midst of rushing headlong into a project that may end up costing us dearly.
But I've yet to see any indication that the number of new jobs that will be created to power the country by low-carbon sources is going to be fewer than the number of people currently employed in the fossil fuel business.On top of that, concerns about the pay for these jobs seems both unfounded and at least a bit misplaced. Even if these jobs do pay less than existing jobs (also not a given), considering that the country is hemorrhaging jobs of all types, is it better to have a job that pays slightly less than no job at all?And finally, it comes down to the fact that we don't have a choice but to make this switch happen and we will adjust with the consequences. Even if green jobs and the green economy are not a panacea for all our problems, the climate crisis is not going away..." See full article.
Posted by Kevin Coyle at 5:55 PM